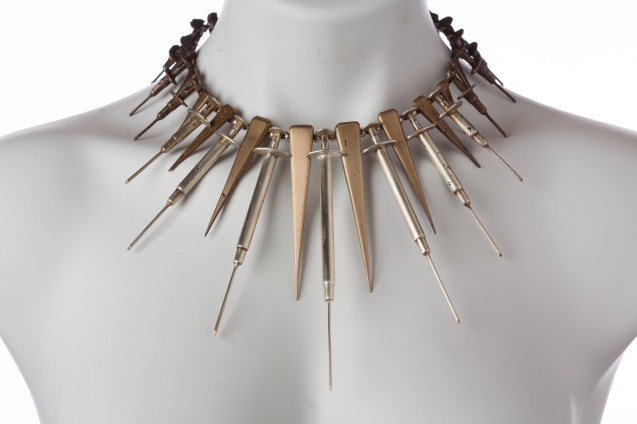 Cast silver and bronze spikes and syringes on a silver rod. 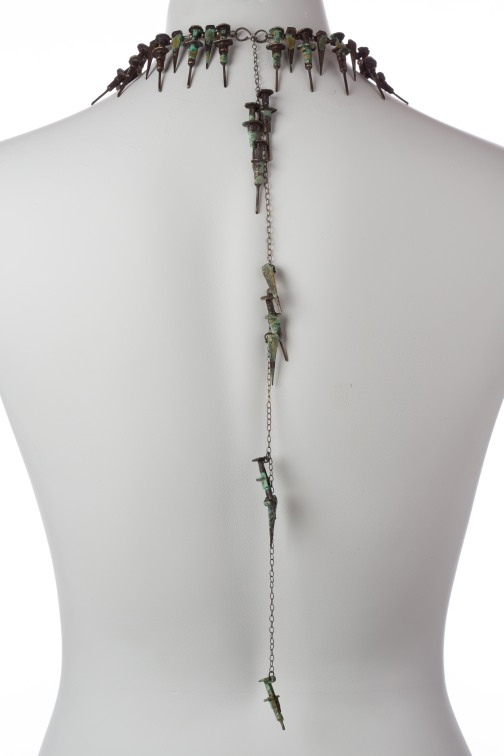 Back of necklace.
Cast silver and bronze spikes and syringes on a silver rod.

This piece was one of the last I created before I entered graduated school, and it was one of the biggest projects I ever undertook, with a total of fifty cast pieces. Having spent a large part of my life dealing with illness of varying degrees, and the last year in and out of the hospital and doctors’ offices, I wanted to create a piece that explored the system of inequality that runs rampant in modern privatized medicine.

To create this piece, I first molded a syringe using silicone ear bud material, to create a mold that I could pour hot wax into to create hollow-backed syringe forms. Using those waxes, I created syringes of various lengths, and used them to cast the silver syringes and a small bronze syringe. I used a vulcanized rubber mold to mold the smallest syringes and spikes, so that I could create lots of multiples using a wax injector. I added the tubes in wax before casting to cut down on soldering and finishing times. Once all was said and done, all that was left was a massive amount of clean up and to cap off the end of the rod with jump rings and an s-hook closure, from which dangled a chain with additional syringes and spikes.

I wanted the piece to have the feeling of a noose tightening around your neck, because I believe that there is no positive end to the situation we find ourselves in with for-profit health care.